The first release from the Office for National Statistics (ONS) on 16 July 2012 of the 2011UKcensus indicates that in the first decade of the twenty-first century the population of England and Wales has risen by 3.7 million (from just over 50 million, an increase of about 7%), and over 50% of this increase consists of migrants. In general, the term ÃÂ¢Ãâ¬ÃËmigrantÃÂ¢Ãâ¬Ãâ ¢ is associated with recent arrivals in a foreign country. In the UK, migrants who have been in the country for a while, including their descendants, are described as belonging to ethnic minorities. The trajectory for the future suggests that, in 20 yearsÃÂ¢Ãâ¬Ãâ ¢ time, the total population of England and Wales will have risen to 70 million. It is expected that migrants will account for two-thirds of this increase. In theUKas a whole, approximately 15% of the total population will be of migrant origin, equivalent to about one in six or possibly more. This is considerably higher than the current figure (about 4%) or any projected figures for the European Union (EU).

In the UK there is extensive legislation that imposes a duty on the NHS to provide all reasonable healthcare requirements for all of its users. Equality legislation prohibits direct or indirect discrimination of any kind on the basis of race, which is defined as a protected characteristic. Although the right to health is enshrined in many legal instruments, there are a number of obstacles to migrant/ethnic minority populations receiving appropriate healthcare. These include linguistic barriers, lack of familiarity with the health system, and cultural or other barriers that may impede access to services.

Long-term conditions are associated with higher mortality. Clinical variations in the epidemiology of conditions such as rheumatoid arthritis and systemic lupus erythematosus (SLE) have been described in British South Asians. These patients with SLE have been noted to have much more aggressive disease and higher mortality rates than their white counterparts.

National guidelines champion the principle of early diagnosis and treatment of rheumatoid arthritis with specific disease-modifying anti-rheumatic drugs (DMARDs), ideally within 3 months of the onset of symptoms. A multicentre audit of rheumatoid arthritis in minority ethnic groups showed that a high proportion (62%) exceed the 3-month time interval for specialist referral, and there is a delay in the initiation of DMARD therapy of more than 3 months, more than 6 months and more than 9 months in 8%,1%and 10%, respectively, of South Asian patients.

A significant delay in the time taken for presentation of South Asian patients with rheumatoid arthritis to primary care physicians has been reported from Birmingham. The median time taken for presentation to primary care was 24 weeks after the onset of symptoms for South Asians, compared with 12 weeks for non-South Asian patients. A number of causal and attitudinal factors were identified which resulted in patients from minority ethnic groups deploying non-medical self-management strategies instead of seeking medical advice.

Addressing the needs of black and ethnic minority groups can be complex, as these communities have a diverse set of social beliefs, values, languages and cultural attitudes. There is a generalised belief that arthritis is completely dependent upon factors such as ÃÂ¢Ãâ¬ÃËgoodÃÂ¢Ãâ¬Ãâ ¢ and ÃÂ¢Ãâ¬ÃËbadÃÂ¢Ãâ¬Ãâ ¢ foods, or that it is a result of divine intervention. Rheumatoid arthritis may incur stigma, and there is a tendency for minority groups to prefer alternative therapies such as homeopathy, prayer and meditation. In a retrospective study of ethnic differences in response to DMARDs among patients with inflammatory arthritis, people of SouthAsian ethnicity stopped therapy sooner than North Europeans. Possible explanations for this included problems with effective communication, cultural differences in expectations and response to illness. Recent studies have shown increased pain and disability in South Asian patients with rheumatoid arthritis compared with their Northern European counterparts.

• Samanta A, Shaffu S, Panchal S et al (2012) Tinkering at the edges or collaborative symbiosis? Ethnicity and rheumatology: a consensual review discussion. Diversity and Equality in Health and Care 9:000ÃÂ¢Ãâ¬Ãâ000.

• Odutola J and WardMM(2005) Ethnic and socioeconomic disparities in health among patients with rheumatic disease. Current Opinion in Rheumatology 17:147ÃÂ¢Ãâ¬Ãâ52.

• Ghelani A, Mastana S and Samanta A (2011) Rheumatoid Arthritis among South Asian and Caucasian Populations of the East Midlands in the UK: a genetic and bio-demographic analysis. SaarbruÃâÃÂ¨cken, Germany. VDM Verlag Dr. Muller.

• Griffiths B, Situnayake RD, Clark B et al (2000) Racial origin and its effect on disease progression and HLA-DRB1 types in patients with rheumatoid arthritis: a cross-sectional study. Rheumatology 39: 857ÃÂ¢Ãâ¬Ãâ64.

There is a paucity of data on the effects of ethnicity on psoriatic arthritis. Data from Asia show a prevalence of 10ÃÂ¢Ãâ¬Ãâ100 per 100 000 members of the population in China, and 0.1ÃÂ¢Ãâ¬Ãâ1 per 100 000 in Japan. In Singapore, psoriatic arthropathy is more common in the Indian population than among the Chinese population, and therefore Indian ethnicity is acknowledged as a risk factor for arthritis. However, a recent observational study noted that there is a significant difference in disease perception (tender joint count) and pain and health assessment scores among Gujarati patients with psoriatic arthritis compared with their Caucasian counterparts.

Bone mineral density (BMD) has been found to be lower in the South Asian (Gujarati) population than in the local white population in Leicestershire. A significant trend towards vitamin D deficiency in South Asians appears to be the main causative factor, especially in view of the fact that vitamin D levels have been found to have a positive effect on bone mineral density. There is little information available about osteoporosis or osteomalacia for minority ethnic groups. The information on ostemoalacia that is available is of limited benefit, as its cultural competence is open to question.

To date, the focus on musculoskeletal health in minority ethnic groups in the UK has been lamentably limited. The recent 2011 UK census indicates a rapidly growing trend towards the UK becoming an even more pluralistic multi-ethnic society. If musculoskeletal health is to be truly meaningful for minority ethnic groups, a consensus on good practice is required. Good practice needs to seamlessly extend across the levels of policy, provider organisations and healthcare workers in order to integrate strategy and implementation that is culturally competent for ethnic minority groups. 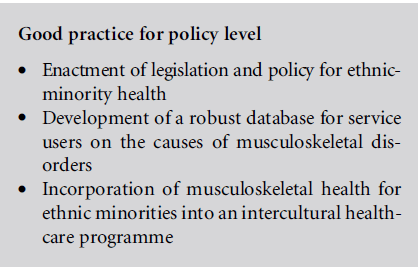 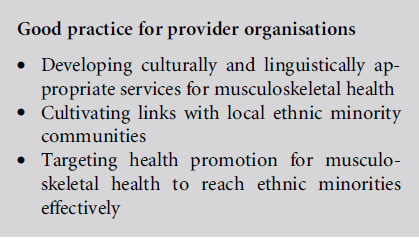 • Samanta A, Shaffu S, Panchal S et al (2012) Tinkering at the edges or collaborative symbiosis? Ethnicity and rheumatology: a consensual review discussion. Diversity and Equality in Health and Care 9:000ÃÂ¢Ãâ¬Ãâ000.

• There is a growing ethnic minority population in the UK, of which South Asians currently represent the largest group. There is a paucity of data on musculoskeletal health in this group.

• There are a number of non-medical cultural beliefs about the causes of arthritis, and alternative approaches to therapy are preferred to conventional medicine.

• There is a paucity of culturally competent educational material related to musculoskeletal conditions.

• Observational studies have shown clinical variations in rheumatoid arthritis, systemic lupus erythematosus and psoriatic arthritis in ethnic minorities. There is a need to understand and address social beliefs, language and culture in order to achieve optimal healthcare.

• Coordinated good practice at the level of policy makers, provider organisations and healthcare workers is required to ensure that ethnic minority groups have access to healthcare services that are responsive to their needs.