Copyright: © 2021 Akhil P. This is an open-access article distributed under the terms of the Creative Commons Attribution License, which permits unrestricted use, distribution, and reproduction in any medium, provided the original author and source are credited.

In a 2019 study by Harris County Health System, Houston, Texas, Dr. Umair Shah, Director of Harris County Public Health, stated; “Where you live often determines how well and how long you live”. This statement by Dr. Shah describes the well documented fact that African- Americans and other ethnic minorities living in underserved communities in Harris County or perhaps what should more appropriately be called “under-resourced” [1]communities are at greater risk of infections from the COVID-19. The COVID-19 Pandemic has led to tracking by targeted zip codes. The results show that, in U.S., there is a higher incidence of COVID -19 in under- resourced than non-under resourced communities [2]. Besides being under-resourced or underserved, there are also some long-term social factors that significantly contribute to and serve as determinants of the quality of health and social wellbeing of African- Americans and other ethnic minorities. These include: low income, overcrowded housing for family size, poor nutrition, limited education, and access to poor healthcare. (See Federal Reserve, Survey of Consumer Finance) Figure 1 [3]. The Civil Right Bill of 1965 (CRB ‘65) removed some of the Jim Crow Laws that proved to be structural and cultural barriers to Blacks entering mainstream society. However, the effects of social isolation caused by segregation have had long term adverse effects on the biological, physiological and behavioral health of Blacks and other ethnic minorities [4]. To a large extent, research is still lacking to better understand and improve the quality of health for future generations of African Americans. According to the Center for Disease Control (CDC) and the World Health Organization (WHO), health is defined as: the physiological, mental and social well-being of a person or group. Historically, [5] it is well documented that African Americans born out of American Slavery have traditionally been inhabitants of socially impoverished conditions. Fast forwarding to the present, African Americans remain the most socially vulnerable and the ethnic group suffering from the highest rate of chronic diseases. These diseases include: Diabetes, Hypertension, Obesity, Chronic Obstructive Pulmonary Disease (COPD) and Mental Illnesses. According to the Office of Minority Health (OMH), these chronic diseases have contributed to African Americans having the highest mortality rate associated with COVID-19 deaths [6]. 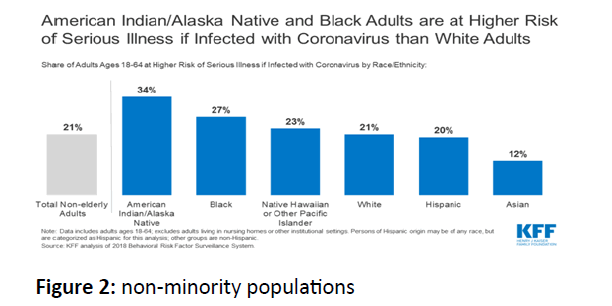 A study by the Kaiser Family Foundation, KFF( 2018) also found people with low household income are at higher risk of serious illness when infected with the coronavirus .This study indicate that the age range of population studied were adults 18-64.As shown in the chart below, (figure 2)of the total population studied , 21percent were non-elderly adults. What is very, very revealing in this KFF study is that based on the income level of non-elderly adults, the lower the house income level, the higher the risk of coronavirus infection.

The point being made in the citation of the foregoing studies is that, a number of health and social challenges place African Americans and other ethnic minority populations at higher risk for poor health in the aftermath of the COVID-19 pandemic. This includes higher mortality, more medical complications, limited access to health care, lower annual influenza vaccination rates, greater socioeconomic, cultural, educational and linguistic obstacles to the adoption of pandemic interventions. The OMH 2020 data collection from the COVID-19 pandemic suggests that African Americans and other ethnic minority populations bear a disproportionate burden of illness and death from the COVID-19 [11].

The decline and paucity of black professional schools has also contributed to the health inequity in African-Americans and other ethnic minority populations. As the United States population continues to grow in number, age and diverse cultures, the need for medical facilities in the under-resourced communities will also continue to grow. Currently there are 100 plus Historically Black Colleges and Universities (HBCU’s) that are adjacent to under resourced communities. However, in the entire United States, as compared to their white counterparts, there are only (4) Black medical schools, seven (7) Black pharmacy schools and forty(40) Black nursing schools to serve the under-resourced communities [6]. Hence, the disproportionate number of black physicians as compared to white physicians also contributes to the socioeconomic and health/healthcare inequities or needs in under resourced communities.

Today, the shortage of physicians is being offset by the rapid advancement in computer technology or what is called tele-health [9]. This is making it necessary for HBCU’s to expand their health curricula into non-traditional roles in healthcare delivery. That is, HBCU’s must now integrate tele-health into their curricula as an outreach to the under-resourced communities. The expanded HBCU curricula not only promote closer communications between HBCU’s and the adjacent communities, this non-traditional HBCU role has also become important in the removal of cultural and structural barriers. Specifically, this non-traditional HBCU role reverses the inequities that exist in the health and healthcare of under-resourced communities. The formation of Community University Task Force Committees can also be used to better coordinate different community groups to expand the role of HBCUs as institutions of higher learning [12].

The primary goal of such joint task force committees would be the prevention and treatment of the aforementioned chronic diseases in African American and other ethnic minority populations. The chronic diseases referenced here are: Obesity, Diabetes, Hypertension, Chronic Obstructive Pulmonary Diseases (COPD) and other respiratory diseases e.g. COVID-19 and mental illness.